UploadVR posted an article this evening about the newest Leap Motion prototype. This paragraph caught my attention:

According to Leap, its goal for the new module is not to package and sell it in Best Buy as the “Leap Motion 2.” Instead, the group wants to work with VR headset manufacturers themselves to integrate the hand-tracking sensor directly.

As much as I love the Oculus Touch and HTC Vive Controllers, accurate hand-tracking in VR is definitely the future. I’m excited not only because of the technology involved, but also because when manufacturers include this in their future headsets, it means that everyone will have it moving forward. We won’t run into another Sega CD / 32X add-on nightmare scenario where our userbase is fragmented between those who have it and those who don’t.

I got a chance to try out the original Leap Motion when we got one at the lab. It was just a few days after they released their major Orion upgrade, and I came away entirely impressed. 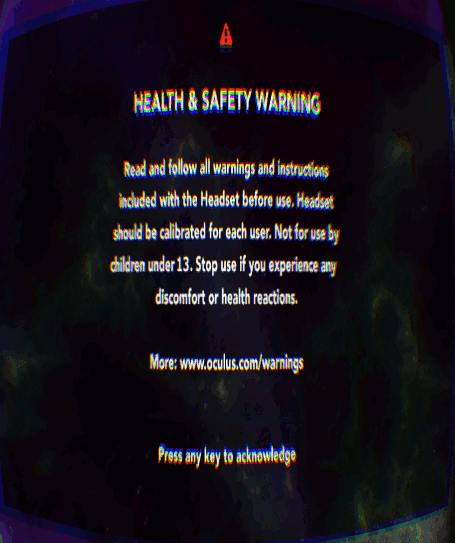 I understand the need for a warning when loading an app for the first time off of the Oculus Share store, etc. but as a developer it’s insanely annoying to have to go through this thing every single time you run your game. So, if you’re working on an Oculus Rift app and you want to get rid of it while you work on it, here’s how to do it in Windows.

1. Create a text file called “oculus3d.reg” with these contents and run it.

2. Open the Oculus VR Config Tool and click on the “Advanced” button underneath the player height field.

3. Check the box confirming you don’t want to see the warning any more.

4. Develop your game faster by being able to save 10 seconds every time you test your game.

I’ve had my Oculus Rift Developer Kit Version 1 (DK1) for just under a year, after receiving my kit on April 11, 2013. In that year, I’ve built a few apps and played with a ton of other people’s apps from Oculus Share. My experience with the DK1 is that, while it’s good, it’s not great. It’s funny, because, while the low resolution and heavy screen-door effect were the two initial problems I had with the unit, over time, they took a back seat to another, more basic problem:

The Oculus Rift DK1 wire is fucking annoying. Not just annoying, but a lot of the time it ruins the experience of immersing yourself in the virtual environment. The new term that people are using for this is “presence.” When I’m wearing it, I can’t turn around fully without feeling the wire tickle my neck or hear the breakout box slide across my desk, which makes me worry that it’ll fall off and I’ll break it, so I take the headset off to make sure it’s safe. The wire undoes exactly what the rest of the kit is trying so hard (and succeeding, mostly) to do: immerse me in the experience. All the time that I use the unit, I fear of fully moving in any direction because the wire is there.

That wire has got to go.

I know that Oculus is working its hardest to reduce the latency between the time that you move and the time it shows the movement on the screen in the headset. I know that going wireless will increase that latency. But, hot damn, at this point, I’m almost willing to take a slightly more delayed response if I can do without the wire.

So excited for this.

I’ve been planning out my first game. I’m going to call it Barf. Simply, it will change your view in whacky, unexpected ways whenever you move the headset (and sometimes even if you don’t). Online leaderboards (probably powered by Google App Engine or something of the like [is that thing free still?]) keep track of who has gone the longest before ralphing.

So happy. I blogged about the need for something just like this 3 years ago.