I’m taking a few hours tonight to go through the archives and put up some of my finished/unreleased/unfinished game jam projects onto github. Ludum Dare 26 is next weekend and I want to have a simple URL to send people to to try out my stuff. 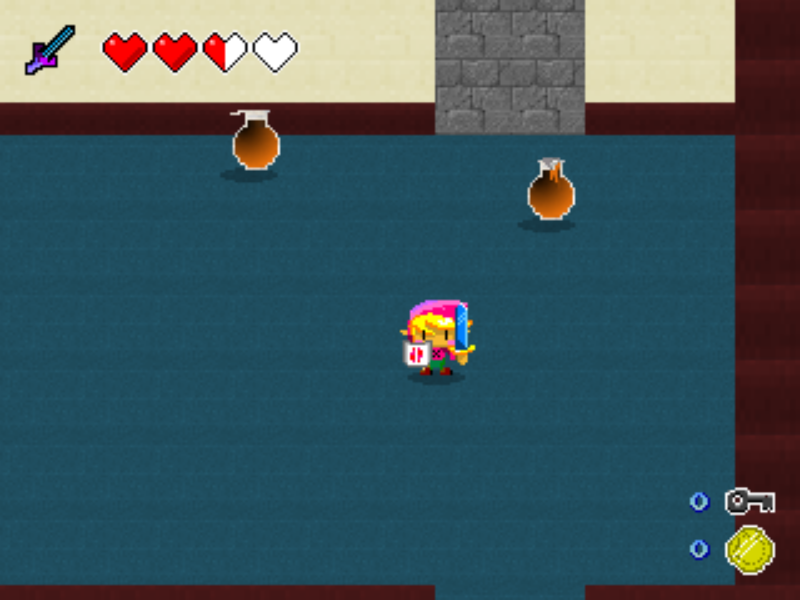 Syrup Dispensers From Hell is coming along quite well. I’ve decided to use the Legend of Sadness base for the game, which plays and looks a lot like a Legend of Zelda title. Instead of having our hero travel into a cave, he’ll be travelling into a breakfast restaurant to save us all from horrid syrup dispensers.

This time around I’ve got a lot more experience working with Akihabara so I’ve been able to work harder on gameplay and graphics rather than learning how the game engine works. Designing tilemaps for a game, as a programmer, is tough work. It’s not that I dislike working on art or even that I’m not artistic, but what looks great in The Gimp looks like shit when it’s tiled a hundred times.

A neat feature that I discovered today was Akihabara’s ability to scale the size of the game display by a value that is less than 1, meaning that it does not need to zoom to an integer value. Currently I’ve got the game displaying at 320×240 with a zoom of 2.5, making that actual output 800×600.

I’m under a tight deadline for BastardBlaster, the game I’m building right now for the Guelph Game Jam, so I’ll share my quick and dirty way to convert audio files in Linux and using some Windows software with Wine.

The source music is music modules in the .it (Impulse Tracker) format. So, I used Winamp (running via Wine) to export as .wav files. From there, I used the MP3 to OGG conversion script on this page (modified a bit) to do:

Hope this helps someone in the future :) Note you have to have oggenc (vorbis-tools) installed in order for that to work :)

I’ve got some kick-ass music from David Newton that is in Impulse Tracker format (.it). It’d be great to play it right as-is as the file size is so tiny. Currently, I’ve got export the stuff to MP3 and OGG before it’ll work.